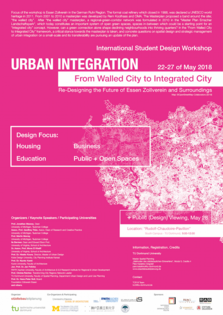 Re-Designing the Future of Zollverein and Surroundings

With its 53 municipalities and over 5 million inhabitants, the Ruhr Region is the largest metropolitan region in Germany. It went through diverse urban transformation processes, the most important of them was the structural change from a montane based economy to one based on education and services. The year 2018 marks a milestone in this process, where the last colliery in the area will be shut down. On the one hand, several districts in the Ruhr region situated next to collieries have to deal with challenges opposed to this structural change, such as high unemployment rates, vacant plots, migration, shrinking. On the other hand, a need for visionary urban design adjustments, the demand for housing supply, innovative educational landscapes and attractive public and open spaces are standing for a chance to reshape the declining neighbourhoods into thriving quarters. With emphasis on urban integration, the Workshop thrives at addressing the complexity of these challenges trough an integrated and transdisciplinary approach that allows for diverse, inclusive and multi-scalar design strategies on a specific context. Moreover, the workshop approaches the Ruhr Region as an incubator for urban experimentation and focuses on Essen Zollverein and its surroundings.

The formal coal refinery “Zeche Zollverein” lies in the north-east part of the city of Essen. During industrialization, it was one of the most important employers in the region. After an uncertain future since its closure in 1988, Zollverein was added to the UNESCO list of world heritage in December 2001 and today Zollverein is open to the public as an attractive Industrial Monument. Furthermore, a masterplan for its site was developed by Rem Koolhass and OMA which was finished by 2010. The Masterplan proposed a band around the site; “the walled city”. After “the walled city” masterplan, a regional-green-corridor network was formulated in 2010 in the „Master Plan Emscher Landschaftspark“, which today constitutes an important system of open green spaces, spaces in-between which could be a starting point for an “integrated city” concept; where the spaces in-between open Zollverein to its surroundings and its surroundings to Zollverein. However, can a green connection alone shape declining neighbourhoods into thriving quarters? In the “From Walled City to Integrated City” framework, a critical stance towards the masterplan is taken, and concrete questions on spatial design and strategic management of urban integration on a small-scale and its transferability are pursuing an update of the plan. For this purpose, four themes are to be developed with an overall focus on new alliances or mixes between them:

The design results will be showcased for the general public on May 28 of May in the Rudolf-Chaudoire-Pavillon. The event will include presentations and a fishbowl discussion related to the topic of Urban Integration.