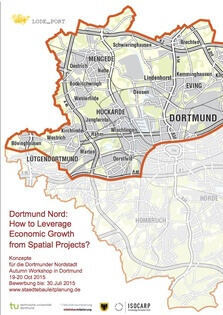 Dortmund Nord: How to leverage economic growth from spatial projects?

"Dortmund, a growing city during the 19th and most of the 20th century met a crisis in the 1980’s and as a result the population and economy started to shrink, as many surrounding European cities did at the time. Emerging from this crisis a plan was put forward; for the past 15 years Dortmund has had a sustained urban regeneration which transformed the heavy industry onto a creative and comprehensive economic model based on urban regeneration and supported by the implementation of technology clusters. Dortmund workshop is a place to learn from the achievements made and the future challenges ahead."

An ongoing structural change and continuing transformation processes mean that the reappraisal of the Ruhr District‘s historic and current spatial development has to become a more and more strategic priority. Compared to most German metropolitan areas the agglomeration Ruhr occupies a special position: it is a polycentric region without a dominant core governed by a multitude of local and regional sectors. At the same time it is characterized by complex oppositions and contradictions in all key areas such as spatial, economic and social development. Renewal had been on the agenda for decades. A lot has been achieved but not yet to the level as previously anticipated.

Dortmund Workshop wants to promote an interchange of experiences from participants and set this space of discussion to create ideas and proposals to the City and the Ruhr Area. Is expected in this creative process professionals participating in Dortmund will share their experience from the 13 papers delivered from 7 countries delivering a rich international setting of dialogue in search for innovative contributions, as well as keen insights to the urban planning challenges we are facing within our communities and regions.

To do so, we are dividing the workshop in three stages: incubation, conception and connection. These three stages shall allow us a framework to produce graphics and videos that are intended to be recorded into a CD which will then be distributed among participants and shown as the outcome of our collective thoughts in Dortmund.

For the incubation process all participants are encouraged to deliver a 5 to 8 minute phone video, MP4 or Quick time preferred format, any other format is welcome as well. we intend to have a simple video document that anyone could elaborate with a home camera, video camera or a phone, and one A2 size jpg file that would deliver the core concept of the proposal each participant has made for the papers delivered to ISCOCARP. These videos will be the starting process together with an additional video of the challenges found in the Dortmund area. Furthermore we will encourage exploring Dortmund and experiencing the positive outcomes of the planning experience in Dortmund and have a personal contact of the challenges still ahead.

At the end of the stage a clear definition of the problem will be outlined in a board.

In this stage dialogues and discussions are expected to take the floor to find solutions. Participant teams will create two A1 boards to show proposals towards the problem, programs suggested for implementation, actions to be taken or considerations that will envision a practical future of Dortmund and the Ruhr Area. Finally, every participant will be interviewed on how these proposals would be beneficial for their own case studies as there were presented in their papers.

At the end of the stage teams will deliver a presentation of their ideas and a discussion to make a synthesis of those ideas will take place.

A final conclusion will be elaborated by all participants to be delivered to Rotterdam in the following stage.